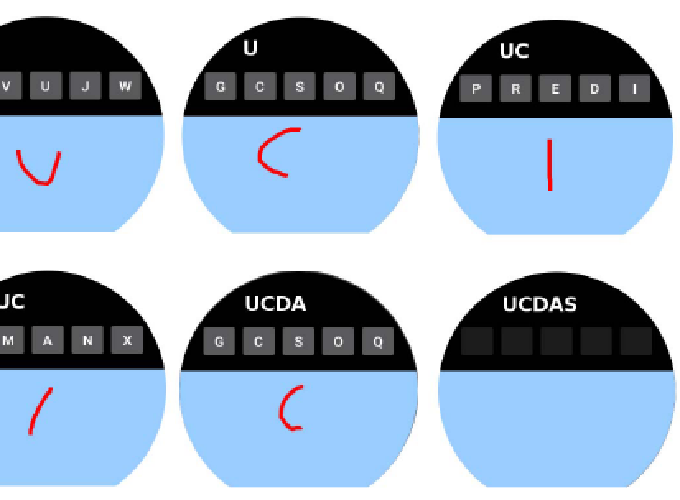 This work proposes a method that allows the entry of text in smartwatches using gestures based on geometric forms. For this it is proposed the development of a prototype capable of inserting a letter with no more than two user interactions. Gesture recognition is performed using the incremental recognition algorithm. A set of gestures with lines and curves were created to be recognized by the incremental recognition algorithm, generated from the reduced equation of the line and the reduced equation of the circumference, respectively. After recognizing the gestures, they are sent to a classifier Naïve Bayes which is responsible for predicting the letter that will be inserted. The Naïve Bayes classifier was trained with a user gesture base that drew all the letters of the alphabet using only the gestures available in the set presented to them. Using the gesture base and the classifier Naïve Bayes a prototype was developed for smartwatches that automatically suggests the most likely letters to be inserted. The prototype was used to perform an experiment, during the experiment the users inserted the five most frequent letters and the five less frequent letters of the English language. The results of the experiment show that the prototype is able to recognize a letter with at most two interactions between the user and the smartwatch. The analysis of the usability and experience test shows that the prototype has generalized potential for use, since it allows the entry of text with up to two interactions and with a 100% hit rate for the most frequent letters and 95.14% for less frequent letters.